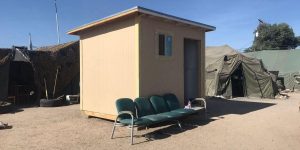 Each tiny home will have enough space for vets to sleep and store their belongings. (Source: KOLD News 13)

Volunteers are building a village of tiny homes on the northwest side near I-10 and Ina Road.

The community will include about 15 tiny homes, each with enough space for vets to sleep and store their belongings. Residents will share a community trailer that has a shower and a kitchen.

About 22 veterans will be part of a 6-month program that hopes to get them back on their feet.

The program behind the project, Veteran Rescue Mission, said vets will receive aid in finding employment, with the goal that they will eventually move to independent living.

YouthBuild Tucson is playing a big part in the project by helping with the construction process.

Members say they have enjoyed watching the project come to life. They say they’re learning life skills while giving back to the community.

“It’s humbling actually. It feels good to be thanked for all the hard work that you’re doing,” Consuelo Cancio said.

Shaleem Petty said, “It’s empowering honestly because I kind of look up to the veterans because they did a lot for this country.”

The first tiny home will be placed on the property at the end of May. The organization hopes residents can start moving in by July.

“Our goal is to try to tackle the recidivism rate and the suicide rate amongst veterans.”

TUCSON – A group is trying to give free medical marijuana cards to homeless veterans.

Logan Bean was a sergeant in the Army.

“I didn’t use marijuana at all,” Bean said. “I was using the pills that the VA was giving me. I was on a whole bunch of things. I had a whole cocktail. It ended up being increasing and increasing and increasing as my body adapted to it. And it got to the point where the side effects were getting worse as well.”
Rep. Blumenauer Is on a Mission to Make Marijuana Law ‘More Realistic’
featured by

“Pharmaceuticals have all these weird side effects,” he said, “like diarrhea, stomach cramps, insomnia. I already have insomnia, so I don’t need more on top of it.”

They are living at a homeless camp on private property called Bravo Base. That is where they met Jon McLane. McLane got a medical marijuana certification clinic, Dr420, to write recommendations for free and pay their state fees.

“For a lot of homeless vets it’s nearly impossible,” McLane said. “Even if they do get some type of pension from the government or some type of disability, it’s still a high expense to fit in to one’s budget.”
Sign up for the daily Snapshot newsletter
The most interesting and talked-about stories from Arizona and beyond delivered to your inbox weekday afternoons!

McLane led the Occupy Tucson protests and sued the city of Tucson. Now he is focused on helping homeless veterans through his organization Veteran Rescue Mission.

“Our goal is to try to tackle the recidivism rate and the suicide rate amongst veterans,” McLane said, “and being able to medicate appropriately is a big part of that, and particularly, when you get your card you’re not a criminal anymore.”

Another veteran who received the free certification has found housing.

“Once I tried it I was like, ‘This is working,’” Bean said. “And so I kept doing it. I noticed a huge difference, and I’m completely off all those pills.”

McLane hopes to expand the program to help more veterans. He said people can contact Veteran Rescue Mission or Bravo Base if they want to help homeless veterans. The groups also focus on connecting people to services from the VA and other agencies.